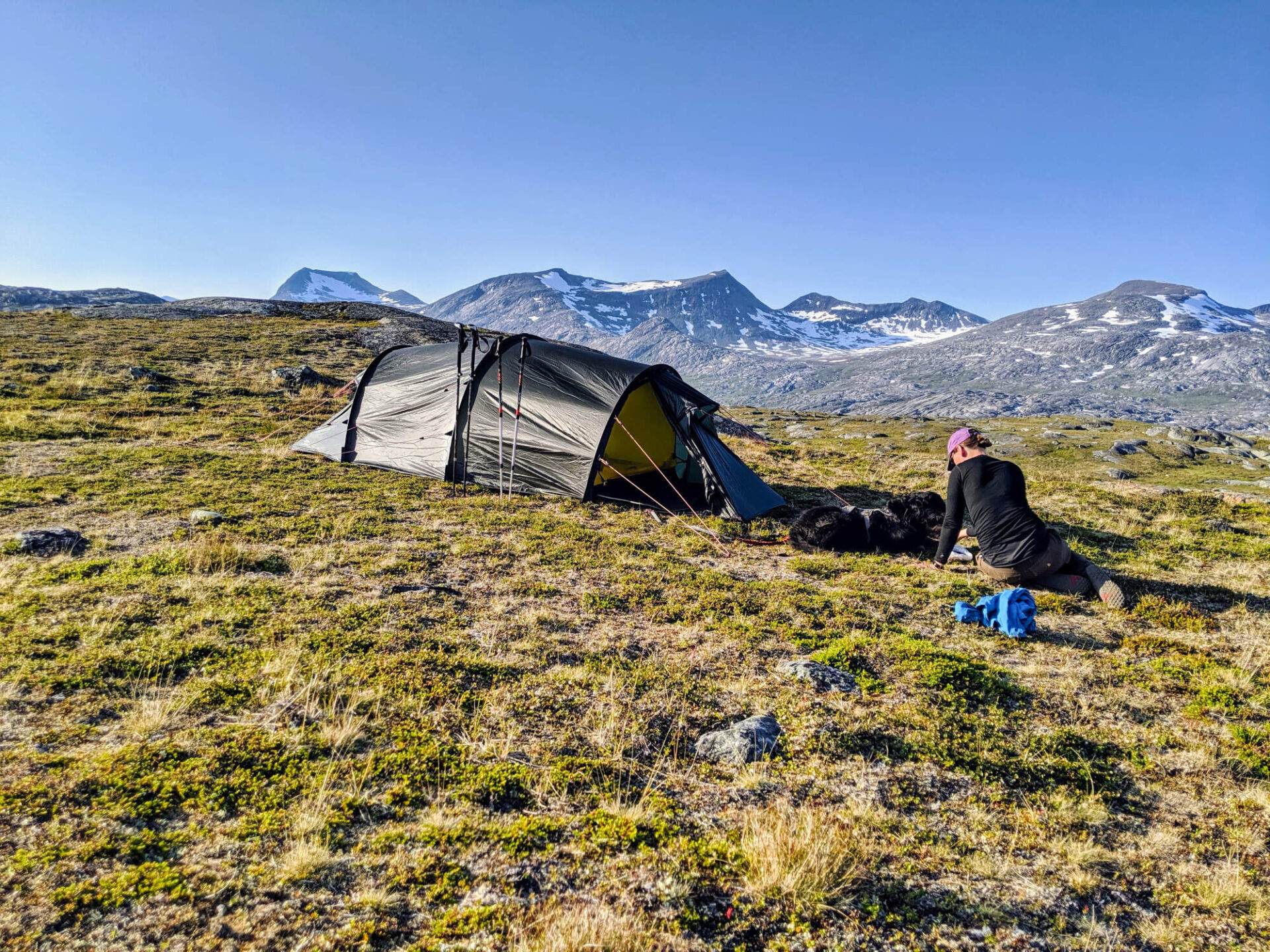 The sixth day brings us an equally blue sky as the days before. In the morning at half past five when we get up it is already quite warm. From the window of our cabin while having breakfast we see the steep climb that lies ahead of us right at the beginning of todays section. We have set the alarm clock to start early and to get the ascent behind us before the sun gets really strong. After crossing the pass we will descend towards Gautelis reservoir. Shortly after our departure and only a few hundred meters behind the Cáihnavággihytta, the low grass slowly gives way to scree and we climb steadily. We look back once again and notice that life is slowly coming to the cabin behind us. The small German group will probably follow us with some distance.

From another hiker we got the advice not to take the official path east of the lake, but to climb up the steep face in the west. She said that it was better to walk through the snowfield than in the snow-free scree on the official path. However, when we see the steep, snowy northwestern side of the lake, we decide to follow the marked path. We don’t want to take the risk of slipping and making a wet and cold landing in the lake, which is still partly covered with ice.

Lando has his difficulties with the big boulders

Instead, we cross the river that connects this lake with the lake down by the cabin. It is already the second river crossing today. It is not deep, but quite cold. After that we climb uphill in the hot sun through a scree field that gets steeper and steeper. Lando makes out reindeer on the other side of the lake at some point during the ascent and walks on the leash from now on.

The boulders get bigger and bigger during the climb and challenge us and Lando quite a bit. In addition to how we set our feet, Lando and I also have to pay attention to each other, because we are attached to each other by the leash. But we prove to be a good team and are almost as fast as Manuel despite this extra challenge! Today we also realize that we are slowly getting used to the exercise again, because the ascent is less difficult for us than some sections in the past days. Lando, however, slips several times on the blocks and carries away a graze on a paw.

The thawed snow fields scare us a bit

After three hours we finally stand on top of the pass and have a magnificent view back. We enjoy this extensively before we continue walking. The path now crosses several snowfields, which are thawed by the warm temperatures and really wet. We are a bit queasy while we pass over them, because we can’t see what’s under the snow. Fortunately, somewhere ahead of us are two Norwegians on the trail, whose tracks in the snow we can follow. This makes it a little easier to find our way. In addition, we hope that the snow will bear us where other hikers were already going today.

Slowly but mercilessly, the midday sun roasts us again today. We have completely covered faces, necks, arms and legs. I probably look like a sheik with several towels around my upper body. Manuel, on the other hand, is more looking like a criminal with a buff plus hood on his face and gloves, since the backs of his hands were already pretty burned from the previous day.

From here on we have nothing but panoramic views

As we descend into the valley, the view opens up to Gautelisvatnet, a reservoir whose dam we are walking towards today. The scree is slowly overgrown by grass again and the landscape becomes more lovely. Originally we planned to walk to the Gautelis cabin. But since this would entail a detour of about seven kilometers, we spontaneously decide to head directly for the next cabin at Skoaddejávri.

The junction leading to Skoaddejávri is not easy to find and we are more lucky than good that exactly at this point the two Norwegians walking in front of us are taking a break. In the short chat with them it turns out that we will have to leave our trail here. Without their hint we probably would have run past the hidden markings otherwise.

Shade is absent today: even at big stones we hardly find any

A little later, we also take a short rest in the shade of a large stone. However, we don’t stay there very long, because the sun is so high above us that it seems to get everywhere. We hope to find more shade at the dam and continue walking. As we hike on, we meet the German group from the day before again, who are walking faster than we are. They left the cabin about an hour after us and we have seen them behind us ever since. Slowly the three come closer and finally they overtake us.

Now that we are walking behind them, we observe that one of the three is staggering slightly and no longer looks particularly fresh. He has no sunscreen and that with light blond hair and equally light skin. We suspect a sunstroke and feel sorry for the poor guy, because the other two seem to have little regard for him. Slowly they disappear out of our sight, but already a little later we meet them again resting at a big stone.

Shade at the Gautelis dam- rarely have we been so happy about being out of the sun!

So we overtake again and walk further towards Gautelis dam. It is not far anymore and when we arrive there we are relieved to find out that we were right with our guess for shade. At the dam there is a small engine house that provides enough shade for us. We take a break there for more than two hours until at 17:30 the sun shines much less intense. In the meantime the group has overtaken us again, the father gave us the information that he intends to continue walking at least another ten kilometers. We are skeptical and feel a little sorry for the two boys. Their mood does not seem to be so good.

Perfect campsite including the best view

From the Gautelis dam we walk for a while along a loosely paved road. There we also see some campers and caravans. We make fast progress on this easy section, but are nevertheless glad to rejoin our track a little later. Clearly visible cairns show us the way, which meanders gently over meadows. We don’t get far on this day, because a campground with a great view is on our way. We simply can’t resist. And even if we are curious whether the three Germans still made it to the cabin, nothing can motivate us today to hike any further. At this point we are just too much enjoying our hike.

After we have set up our tent we enjoy the mosquito-free view over the lake below us and the mountains for a while. For this purpose we have rolled back the one vestibule of our tent completely. That way we have a free view into the landscape directly from the inside of the tent! Meanwhile Lando is watching the reindeer moving all around us. What a great end of the day!


Cáihnavággihytta is located at a lake as well and is locked with the DNT key. However, it is situated at an elevation of slightly more than 1000 m which is higher than the Cunojávrihytta. The view into the mountains still covered by some snow was great. 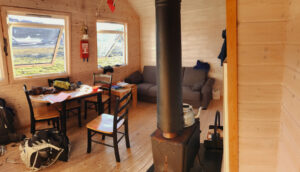 
The sixth day: From Cáihnavággihytta to the campsite at Čoarddajávri.
Behind the Cáihnavággihytta begins the ascent to a pass, which is about 1180 m high. The marked trail east of the lake is demanding and requires surefootedness in the scree field. However, the “secret tip” west of the lake to take a shortcut seems more difficult to us. Shortly after the pass we have to decide: left towards Gautelishytta, right towards Skoaddejávrihytta. We take the right path. Attention, it is easy to miss. Behind the Gautelishytta dam there is a gravel road and here we see some campers. Soon the trail leaves the road and after about 1 km we find great campsites.


About 1 km behind the gravel road at the Gautelis reservoir we find good campsites. We have a great view over two lakes into the endless vastness of the magnificent landscape here in the far north. Nearby we find a small stream with wonderfully fresh and cold water. 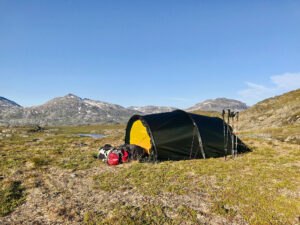