We have been on the trail for that long

More than 2,700 km of long-distance hiking through Norway lie ahead of us

Learn more about our adventure here 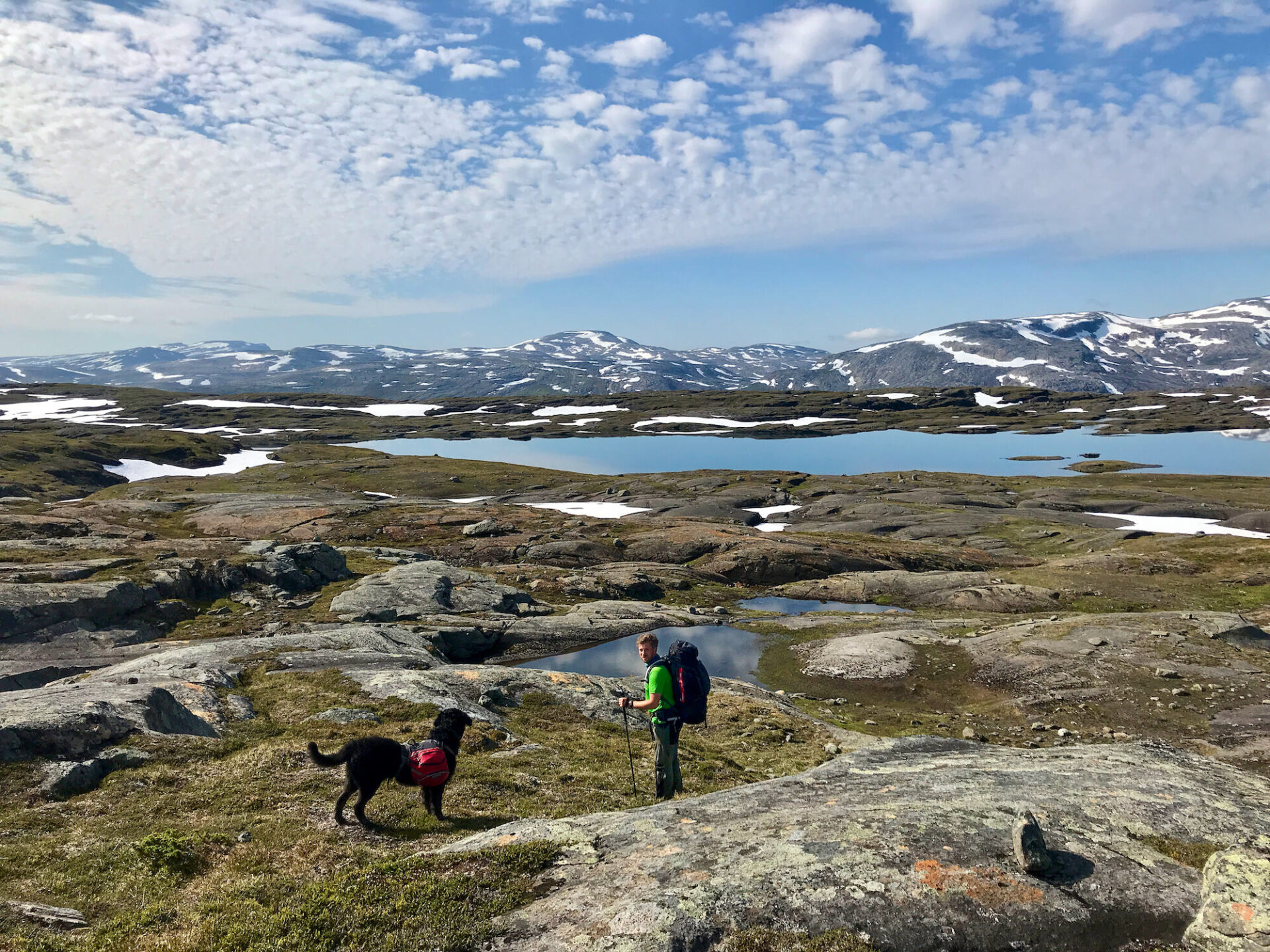 We sleep in this morning and therefore do not leave until half past eleven to start into today’s stage, which will lead us from the Nordkalottleden to the Gränsleden. Initially, we had considered staying another day and enjoy this beautiful place.

A dog alone in the mountains?

The reason why we eventually decide not to spend a rest day at Røysvatnhytta is mainly related to several entries in the cabin book: different guests described a dog roaming alone between two rivers (the inflow to the Sårgåjávrre and the Rikkekjåhkå) south of the cabin on the Nordkalottleden. The northern ford is already notorious among hikers in normal years. This year, it seems to be even deeper and more rapid due to the melting snow, and we have heard of hikers being washed away there. We are concerned that the dog’s owner has met a similar fate. However, since the dog has been spotted at this location for several days, we probably can’t help the hiker.

What are we going to do now?

We think about what options we have: we could try to find the dog and take it with us. We would have enough dog food with us. However, the trail section is not on our planned route and we would have to walk back afterwards. Alternatively we could hike directly to Ritsem, where it would be possible to get help. We decide to walk to Ritsem by the quickest way and inform someone there. It is too unsafe to go and look for the dog. What if we cannot find him? And then there would still be the owner.

Nevertheless, I can’t get the dog out of my head for the next few days. It occurs to me that we would also have been pretty much on our own in an emergency. Since we were shortly behind Pauro, we have not seen a single soul. To get from here back towards civilization, we need at least two days, no matter in which direction we go. For the first time I wish I had a satellite phone with me. We plan to do some research about this for the next trekking tour.

A new section: we turn onto Gränsleden

From Røysvatn we follow the Nordkalottleden heading further south for a while, which crosses the Gränsleden a little after the cabin. Today we want to turn onto this new trail and follow it to Ritsem. Our original plan was to hike from Pauro to Sørfjorden, the starting point of the Gränsleden and follow the whole trail from there. But as we all know, the weather spoiled our plans.

The intersection of the Nordkalottleden with the Gränsleden is very poorly visible. A signpost that once stood here has completely disappeared. You have to look very closely at the markings and at best still take the GPS as an aid. We almost passed the crossing. Once on the Gränsleden we finally find next cairns and occasionally wooden posts with the typical four-colored markings of the Gränsleden.

With the Gränsleden the last section of this trekking tour begins

Now the last part of our hike begins. We leave Norway for good and it amazes us how quickly the landscape changes. If we started in the morning still in high alpine terrain with scree and thick snowfields, these give way to gentler mountain slopes with meadows and without snow in a few hours. Quite early we discover the huge Akka massif with its many prominent glaciers. Throughout the day it comes steadily a little closer. Since it is directly opposite of our destination Ritsem, it will accompany us until the end of our hike.

Gränsleden
Gränsleden (Sami Rádjebálges, Norwegian Grenseleden, German Grenzweg) runs 62 kilometers from Ritsem in Sweden to Sørfjorden in Norway. The trail was opened in 2007 and extended in 2010. On the Norwegian side, Gränsleden is equipped with huts, while on the Swedish side there are only wind shelters.
Historically, the Sámi used the trail on their wanderings since the early 20th century. During the Second World War, Norwegian refugees fled to Sweden along this path.
Unfortunately, Gränsleden does not have its own website and the site of the city of Gällivare has rather scanty information: gellivare.se

The Gränsleden follows this route:

All smaller rivers on the Gränsleden have dried up

We take a long break at a lake. On the Gränsleden water is absolutely rare this year! All the streams we pass have dried up. Since we have not found any streaming water today and according to the map there is no major river coming up, we take water from the lake in our need. Manuel carefully walks into the lake over the slippery ground. That way we at least don’t have to take the warm water from the shallow shore area.

Afterwards we lie on the rocks on the lakeshore for an hour and let the sun shine on our bellies. How wonderfully quiet it is in this place! The mosquitoes do not bother us during this break, fortunately they only accompanied us at the beginning of our day!

Ripe cloudberries along the way slow us down

On the continuing walk we find a lot of ripe cloudberries. For every single one of them we stop, of course, not to miss this delicacy. After about 15 kilometers we reach the Gálavárddo shelter and pitch our tent there for the night. Once again, we didn’t meet anyone today. The view from the windshelter located at the top of the slope is great and we enjoy it with a good dinner.

Shelters on the Gränsleden
On the Gränsleden there are no more closed cabins on the Swedish side, but only shelters. These look like a better bus stop and are meanwhile quite crooked. At each shelter there is also a toilet house. We found good tent spots at the Gálavárddo shelter as well.


Røysvatnhytta is located between the two lakes Røysvatnet and Bjørnvatnet and is the most beautiful cabin in Norway that we know so far! It is well equipped and even has a sauna. North of the cabin is the prominent mountain Bjørntoppen (1500m). 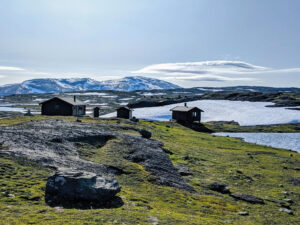 The twelfth day: From Røysvatnhytta to campsite at Gálavárddo shelter.
Today’s leg starts on the Nordkalottleden. However, from this we turn after about 3.5 km onto Gränsleden. Attention: the intersection was difficult for us to see and we were glad for the support of GPS and map on the cell phone. The trail leads us continuously downhill to the shore of Sårgåjávrre and then just as steadily uphill to the Gálavárddo shelter. In the rather dry summer of 2019, it was not easy to find water along Gränsleden. We have therefore used every opportunity.


Immediately behind the Gálavárddo shelter we find a flat and level meadow: an ideal camping spot. For breakfast and dinner we can comfortably use the shelter. 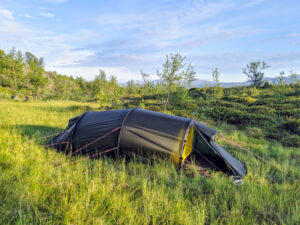 Trekking tour in Lapland: Crossing borders on Nordkalottleden and Gränsleden

We have been on the trail for that long

More than 2,700 km of long-distance hiking through Norway lie ahead of us

Learn more about our adventure here