On the Neanderlandsteig near Velbert: great trails and wide views

With the weather still a bit cloudy we set off for the train station on Saturday at 10:30 am. We decided to miss the train an hour earlier for a good breakfast, so that we arrive at the station well strengthened. It is a 50-minute ride to the starting point of today’s stage of the Neanderlandsteig. While we look out of the window, we use the time to speculate about the outcome of the upcoming European elections.

Velbert-Neviges is the starting point of today’s tour, the third and fourth stage of the Neanderland Trail. Directly at the exit of the train station we discover the red sign of the Neanderland Trail and are happily surprised at how fast it leads into the forest. After a short ascent the terrain opens up and we enjoy the wide view over fields and meadows in this slightly hilly landscape. With the fading of the bells of Neviges church it becomes nice and quiet on our way. Amazingly often the Neanderlandsteig changes between open terrain and forest sections, leads along fences and sometimes parallel to smaller roads. We like this change very much.

Already at the very beginning we discover the ilex in the forest, which stands quite inconspicuously at the trail’s edge. The ilex? That’s right! The ilex, also known as holly, is a very special tree because it is the only evergreen deciduous tree in Germany. Throughout the day we see quite a few ilex trees.

A little later a red kite delights us with its flight show and does not let itself be distracted from its hunt for mice during its low flight directly above our heads. Against the meanwhile blue sky we can see his markings with the white head and the fanned tail! Unfortunately the red kite leaves us quite soon, I could have watched him for hours.

Quite often the Neanderlandsteig leads us directly alongside farms and pastures. In the time between it becomes quite narrow and runs between the fences of two cow pastures. Lando is really not a big friend of electric fences and he also has a lot of respect for cows, which makes him look sceptical when we scratch the heads of the very curious cows and feel the rough tongue of the ruminants.

In Nordrath the third stage of the Neanderlandsteig ends after a little more than seven kilometers. From here you could take the bus back to the starting point. But we also want to hike the fourth stage, and since we still have 15 kilometers to go, we quickly set off for the rest. We don’t get far, when our growling stomachs signal us that it’s time for a first break.

After an apple and a Twix on a bench in a beautiful deciduous mixed forest with great old beech trees, it pushes me on. We were quite slow on the first eight kilometers, and I am thinking that our long breakfast might have been a bit too long… but in fact the next kilometers are going to be much quicker. The Elfringhauser Switzerland delights us repeatedly with almost enchanted looking little paths, then we walk on open field paths with fantastic views and now and then, fortunately not too often, also on asphalt roads.

It smells so wonderfully of pine cones!

After crossing a road, we walk along a meadow with another great view. There are large spruces growing to the right of the path with branches hanging far above our trail. The ground bounces wonderfully because of the many needles and the spruce cones, which are opened by the sun, exude the wonderful scent of a coniferous forest.

At last, the tour continues in a nature reserve along the Felderbach stream for a long time along a wide farm track. Our feet are beginning to get tired and a glance at the clock tells us that we would have to hurry quite a bit to catch the next train.

So we decide to take another break at the picturesque stream and plunder our last supplies. Fortunately, the mosquitoes there seem to have little interest in us. While we enjoy sandwiches and tea, Lando splashes around happily. However, he does not want to drink the water at the roadside on this hike. That surprises me a little bit, as he usually slops out of every puddle. But he seems not to like the water here. Since we had not planned to have to supply Lando with water as well, our water supplies are already used up before the end of our tour. We will bring more with us on the next hike!

Water on the Neanderlandsteig
Be sure to bring enough water for this trip, also for your four-legged friend. Lando didn’t want to drink from streams here because the water probably didn’t taste good!

Many mountain bikers make their way back out of the forest with us. During the day they were not on the Neanderlandsteig, because we only meet them now on the last meters. Anyway, we were surprised how few people we met on a Saturday with such wonderful weather. Arriving in Nierenhof the traffic suddenly seems unpleasantly loud to us. On the way to the train station we quickly turn into a side street again and are surprised to discover how much one gets used to the silence after only a few hours in nature! After about 22 km and seven hours including some breaks we finally reach the station in Velbert-Nierenhof.

By the way, the Neanderlandsteig is a 240 kilometer long circular trail with a total of 17 stages. In addition, there are numerous “discovery loops”, which offer many more hiking possibilities starting from the actual trail. Further information can be found here: www.neanderlandsteig.de

I’m sure it’s not the last time that we are hiking on the Neanderlandsteig!

On the ridge of Knutshøe – high above Jotunheimen National...

Kungsleden – on the trail around Saltoluokta

Hiking in the Ardennes: muddy paths and a missing bridge

On small paths around Schramberg in the autumnal Black Forest

Hiking on the Schluchtensteig in the Black Forest 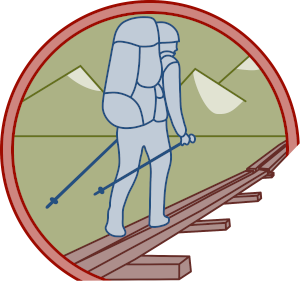