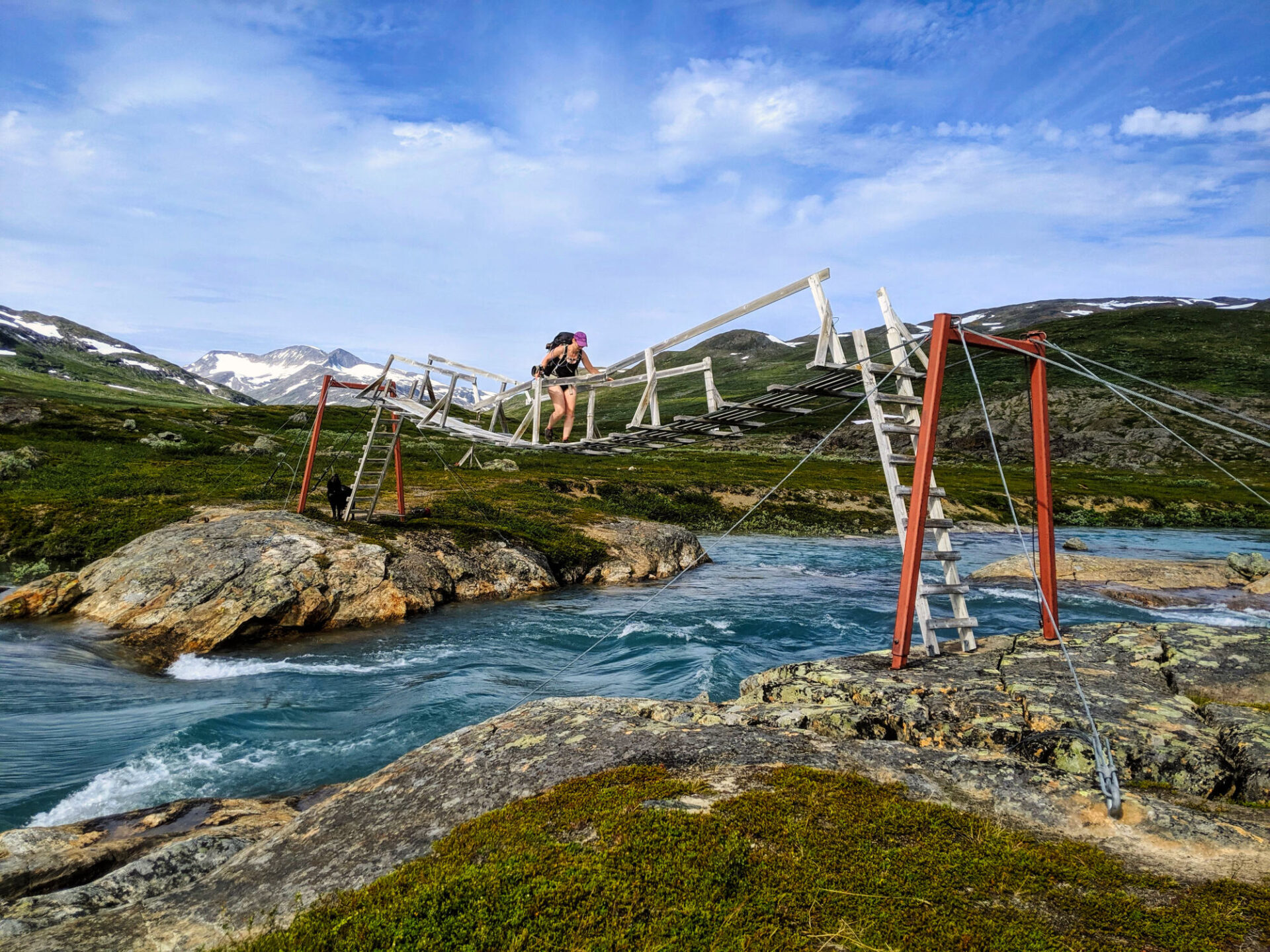 In the morning, before we set off towards Cunojávri, we refill our supplies in the store of Unna Allakas. Unfortunately, the selection is very small, so that in the next few days we will have “Pasta Bolognese” from Blå Band rather often. Well, after long days of hiking, that will taste good too! In addition, this is the last opportunity on our planned route for the next 12 days to replenish our supplies, in other words, we have no choice.

Around 10 o’clock we set off. The hut keeper gives us the advice to take the lower path by the lake, which has been newly built. The old path, a little higher on the slope, is overgrown. Shortly before the Cunojávri hut we would have to cross a river, but according to him we would hardly get our feet wet. And the route of about six kilometers is doable in two hours. We plan to take a short break at the cabin and then continue towards Cáihnavággihytta. The host of the hut looks at us again and states that we are planning quite a big tour. After a second glance, he certifies that he thinks we are well equipped and wishes us a lot of fun!

Always looking for the right trail to Cunojávri

Shortly after we start hiking, things turn out quite differently. First we lose the path and stray a little through muddy meadow areas, before we come across our track again. There are mosquitoes everywhere and we use our jungle oil several times. At the Swedish-Norwegian border we make a short photo break. Somehow it is totally surreal that the huge yellow painted cairns here mark a national border.

We take the lower track as recommended, which leads us to a wading spot after a short time. So once again we take off our pants, socks and get into the water. Arriving on the other side we realize that this is not the right way at all. But by then we have already put our pants back on. We make our way back to the trail cross-country and without crossing another river, and from then on we pay more attention to where we are going. Maybe we are still a bit too spoiled by the trampled paths on the Swedish side.

No way to cross the river on dry feet!

As expected, we reach the wading spot described by the hut keeper shortly before the Cunojávri cabin. We can even see the hut on the opposite bank. But there is no question of dry feet. From the melt water of the past warm days the brook has swollen to a raging, probably chest-deep river. Fording is unthinkable at this point. After I try it for a test anyway and find out after the first meter that the river is really deep, we accept that we can’t get across here.

So we hike upstream, of course again without pants, because we had already taken them off in the attempt to get through the river. Good that there are not so many people running around in the mountains! Several times we try to cross the river at wider places, but in the end we are not successful. We think about going to the old, higher situated path and to examine the ford there. There just has to be a way to the other side somewhere!

On our way to the old path we can already see from some distance that there is a bridge! We realize that it is even marked in our map, we have just not seen it. Trusting in the “local knowledge“ of the hut keeper, however, we have not taken this into account in our planning. The trail leading to the bridge is, on top of that, well visible and much more used than the one recommended to us.

This is the most rickety bridge we have ever seen

Encouraged, we fasten our steps and quickly get closer. The bridge looks pretty rickety and has a steep ladder at the beginning and end, but it leads across the river. After testing the bridge, it’s clear: it’s good for us, but Lando won’t make it across. The railing is pretty broken and partly it is completely missing and there are also planks missing on the floor.

We bring all our stuff across and then look for a suitable spot further upstream where Lando can swim. Fortunately, there is a lake just above the bridge, so the detour is not that big. After we have all arrived safely on the other side of the river, it is about two hours later and we are completely exhausted from the sun and the unusually warm temperatures for Lapland of about 25 degrees.

We walk about ten minutes to the Cunojávri hut and find it very cozy and well tidied up. The predicted two hours have meanwhile become six hours. When we step outside again to collect our backpacks and Lando – we had left both outside – we see two people at the ford where we had failed a few hours before. We quickly run to the riverbank to explain them the route to the bridge.

The roar of the water is so loud that we can’t understand a word, although we are separated by no more than five meters. We recognize two hikers who we have already met in Unna Allakas. Excitedly they wave their hiking map. After some minutes, loud roaring and especially wild waving of arms, we are able to make them understand that there is a bridge upstream. As the two start moving, we immediately set off as well.

Shortly after us, the two arrive at the bridge. They have a short discussion, put down their backpacks and seem a little confused when we don’t come over to them. After a short time, one of the two ventures onto the bridge and it looks a lot easier and more experienced when she crosses than we did shortly before.

Arriving at our side, she explains excitedly that she has found our hiking map in the fjäll. We recognize the map with which they had waved at the ford! But we do not miss a hiking map. Nevertheless, we are once again amazed at how helpful people are out here. We also feel a bit guilty. After all, she crossed the really unstable bridge for us and now she has to go back. The two are on their way to Katterat and will not stay in Cunojávri. We thank them again and then we part ways.

Our first night in a Norwegian DNT hut: the Cunojávri cabin

Back at the cabin we are so exhausted from the many detours and experiences as well as the relentless shining sun that we fall asleep right there on the sofa. Several hours later we decide not to continue today. Later in the evening, two Norwegians reach the hut, but make themselves comfortable in the main house, while we have opted for the newer neighboring cabin.

That evening we are still amazed at how beautifully the cabin is furnished, being in the middle of the wilderness. There is a lot to read and also a lot of info about the upcoming sections. The Norwegian cabins are definitely a completely different experience compared to the Swedish ones!

DNT cabin Cunojávri
The cabin is located directly on a lake where Norwegians like to come fishing on weekends. This hut also played a significant role in the Second World War. Norwegian refugees on their way to Sweden sought shelter here, but were found by the Nazis. The Norwegian resistance burned down the hut so that things would not be repeated.
Beds: 9 in two huts, there is a third hut just for the hut warden who stops by there occasionally (I think there were more beds than stated on the DNT homepage)
Electricity: 12V with solar panel in the new hut, did not work when we were there
Payment: afterwards by Paypal or bank transfer
Key: DNT key
More information: ut.no (Norwegian only)


The hut is situated beautifully. Today we sleep in real beds and enjoy the sauna extensively. In the small store we buy some food. 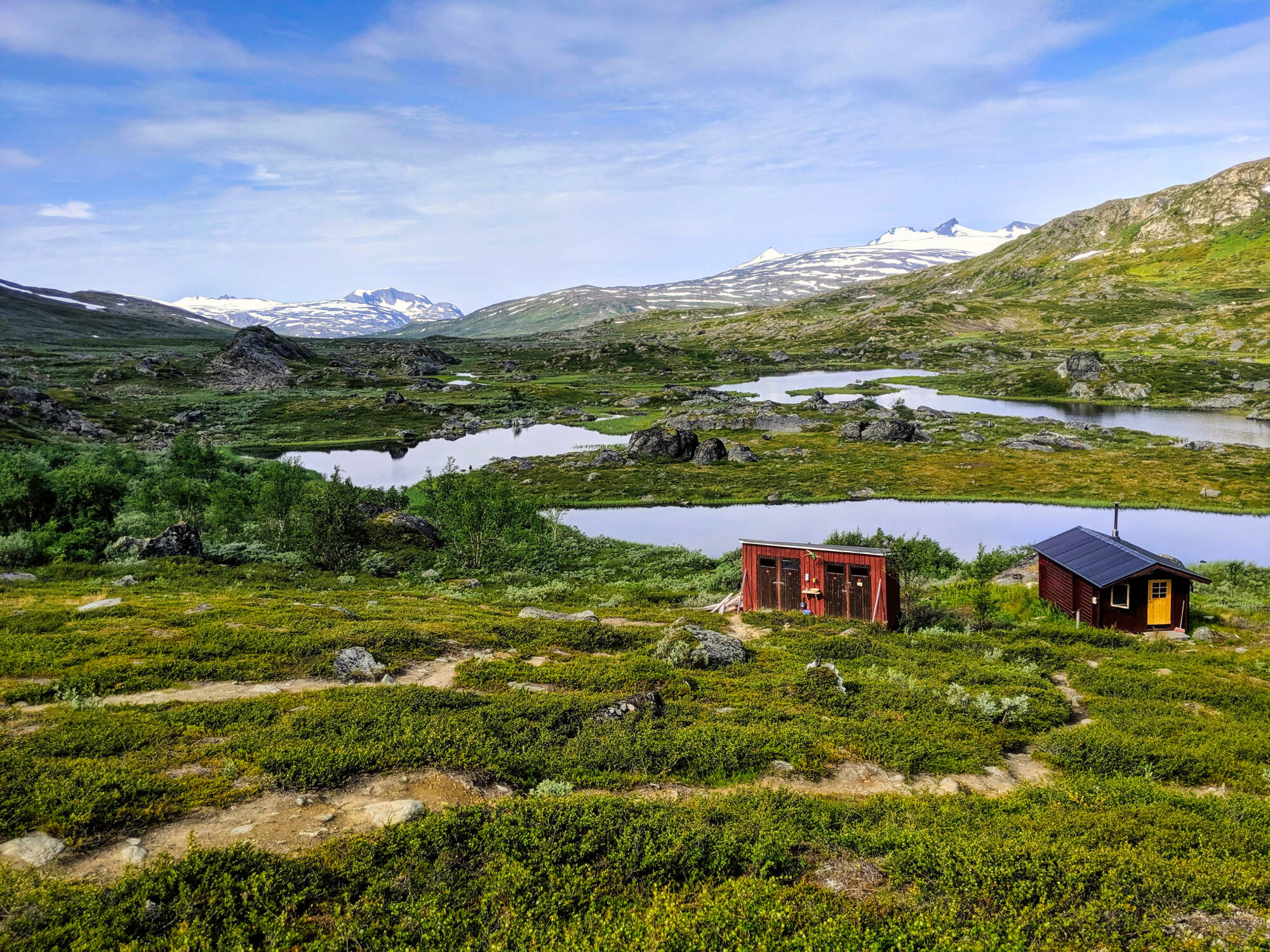 
The fourth day: from Unna Allakas to Cunojávrihytta.
Actually, the distance from Unna Allakas to Cunojávri is not far with about 5 km to 6 km and it is a good idea to continue walking after a short break. However, we are forced to detour due to the late melting of the snow and an unexpected encounter. Finally, it is so late that we decide to spend the night in the beautiful Cunojàvrihytta.


Cunojávri cabin is beautifully situated overlooking the Norwegian lake of the same name. The smaller cabin is well furnished, pleasantly bright and relatively new. It is not serviced and you need the DNT’s key. 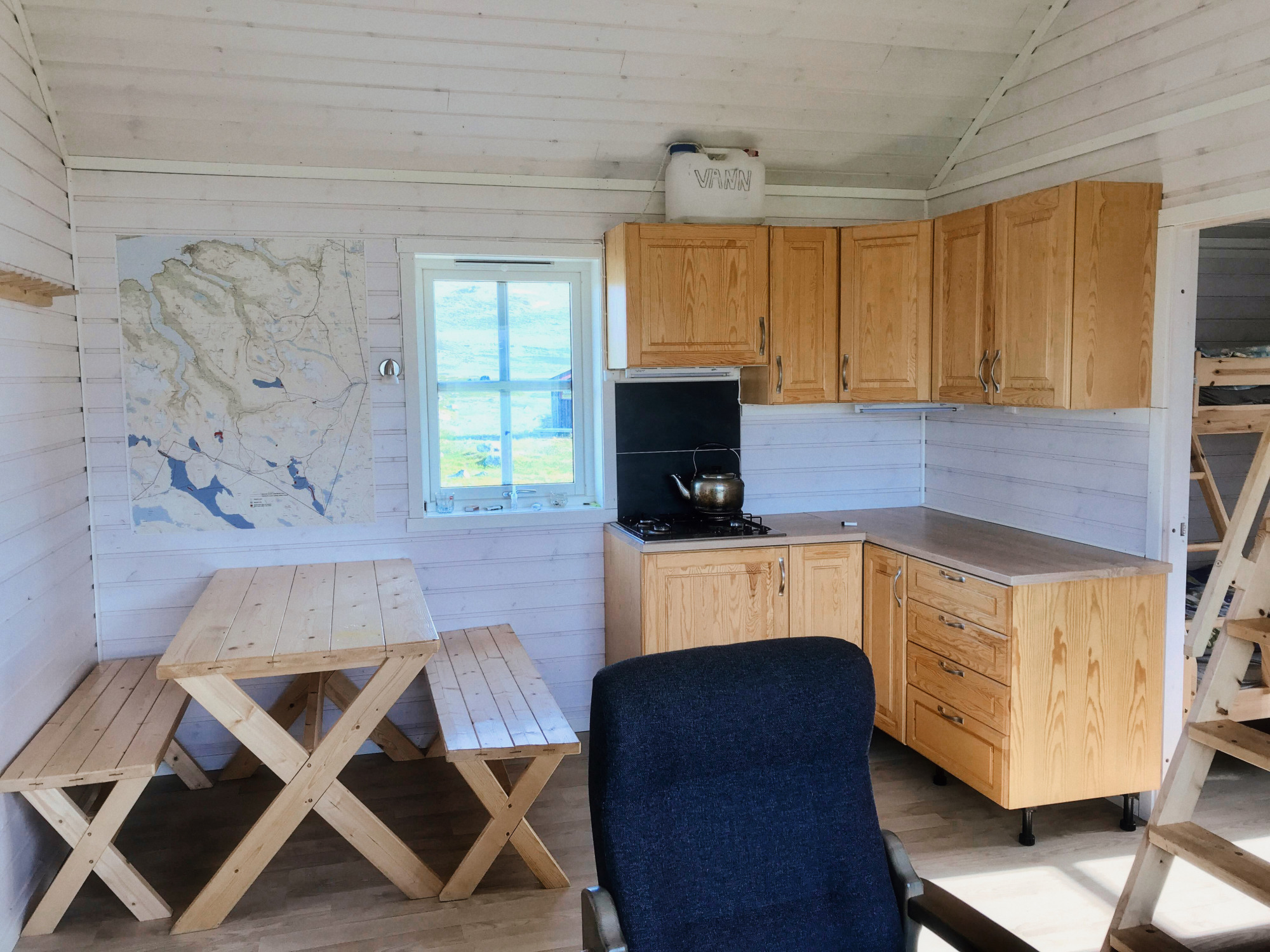 Hello! I'm Manuel. On this blog I will take you with me to my tours and show you the equipment I use on my various trips. There will also be a few posts on planning a trip.